Shockley diode is a four layer (P-N-P-N) semiconductor device. Like pn junction diode It conducts in forward bias and stops conducting in reverse bias. The main difference between conventional diode and Shockley diode is, it starts conducting when the forward voltage crosses it’s breakdown voltage. It is an active components. It is named after it’s inventor William Bradford Shockley.

Shockley was the first semiconductor devices invented which was a “pnpn” diode. ( Types of Diode and symbol) It is equivalent to a thyristor without a gate. Shockley Diode is not widely because of of many alternate devices like Diac, Triac, SCR. These devices works on the principle of Shockley diode.

It is formed by sandwiching four layers of semiconductors material. NPNP or PNPN vice versa. Three junctions are formed due to diffusion of four layers. The internal structure and symbol is as shown in the figure.

Construction of Shockley diode can also be understood by two transistor analogy. a.) Operation in forward biased :

Due to the four alternate layers, there are three junctions in the Diode. When an external voltage is applied to make the anode positive with respect to cathode, the junctions J1 and J3 are forward biased and junction J2 is reverse biased.
The externally applied voltage appears almost completely across the reverse biased junction J2. A very small current (leakage current) will flow through the diode.
As we increase the external voltage, the diode current increases slowly. This will continue upto a voltage called “firing voltage” or “breakover voltage” Vbo. When the current increases to a particular value the diode switches to ON state. This value of current is called holding current in Shockley diode.

b.) Operation when reverse biased :

Resistance offered by the diode: 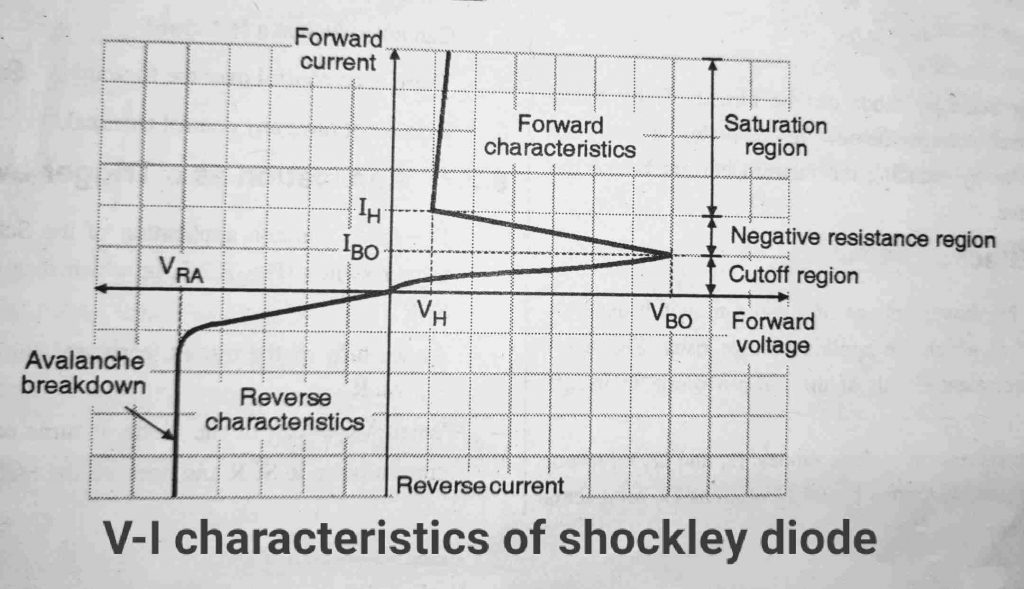 The forward characteristics can be divided into two categories:

3. Saturation region.
When the four-layer diode is forward biased, a small forward current flows until the voltage reaches the breakover voltage Vbo and corresponding current is Ibo.
As soon as forward voltage reaches Vbo the device current increases suddenly and the voltage across the device drops to a low value.
The device thus enters into the negative resistance region for a very short time. It quickly switches into the saturation region or the ON state. The ON state is a low voltage, high current, low resistance region. The voltage across the device in this state is very low.

Once the diode enters into the ON state or saturation region, it gets “latched”.
Even if the forward voltage is reduced the diode remains ON as long as the forward current is less than the “holding current” Ig. Ig is the minimum current required to hold the diode in its ON state.

How to Turn OFF?

A conducting Shokley diode can be turned off by either applying a reverse voltage (anode to cathode) across the conducting device or by reducing the forward current below the holding current value.

4.) Capable of blocking the reverse voltage.
5.) It can be protected against over – current with the help of a fuse.

1. Conducts in only one direction.

2.) Can turn on accidently due to rate effect.

3.) Not easy to turn off.
Can not switch at a fast speed.
There is no control over the forward breakdown voltage.

4.) It does not have any control terminal.

as a Trigger Switch:

The most common application of the Shockley diode is the trigger switch in which it is used to turn on the SCR.
As we turn on the circuit, the RC network is fed to DC supply and capacitor starts charging. capacitor C starts charging towards Vdc Via R.
When Vc = Vbo of the diode, it turns on to provide the gate current pulse to SCR and turns on the SCR. Once the SCR is turned on it remains in the latched state, thus Shockley diode is used only to turn on SCR. Relaxation oscillator circuit using a Shockley diode. In this the diode is connected in parallel to capacitor power with a power supply battery.

As the voltage is applied the capacitor starts charging through a resistance R. When the voltage across the capacitor become more than the break over voltage of Shockley diode, it becomes short circuited and turns ON acting as a Switch. If any query then feel free to ask us…